A few weeks ago, after Chris Tomlinson and some other staffers at the Houston Chronic joked about it, I did a "newspaper bingo – Texas MSM division" blog post. (I included a bit of radio and TV too.)

Now, in less joking fashion, it's time for what the header says. Here's your bingo card, with explainer below. 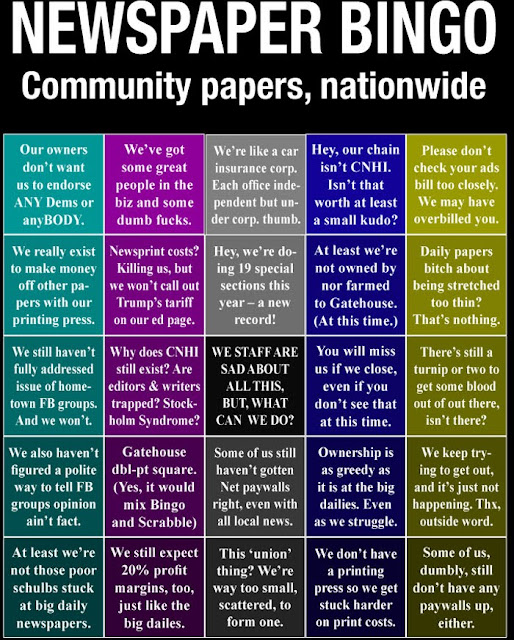 (I originally built it with the same color scheme as the Texas MSM bingo. But, when I opened the PDF in Photoshop to j-peg it, I decided to do an inverse as well. I like it enough I'm using the inverse.)

This bingo is inspired by personal reality.

When did it become a "thing" for newspapers to run ads more than the customer desired, then bill them for the extra runs? (Until and unless a customer notices, that is.)

And, in my opinion, to state those magic words, I don't think it's being done by accident. I of course cannot read minds. So it has to remain my opinion, which remains protected by the good old First Amendment.

Look, through laziness or whatever, I can see a classified ad simply staying on a classified page an extra week at a small-town non-daily paper. But, with ad billing software programs, the customer should only be billed for the number of runs purchased. That is of course true assuming the insertion order clearly says "one run," or "1x," or similar.

I know of this happening at one pair of papers. Personal contact with customers. Both classified AND display ads. On the one case, it ran 6x instead of 1x. Been told it might have happened before. Suspect it's happened nearby. Heard that it's not just an issue with one newspaper company.

I can't say anything more, for various reasons.

But, where I know it's happening? I wouldn't do business with that paper, let alone with a sister paper, if you put a gun to my head.

If you're a newspaper customer, and this happens, and you suspect that, in your opinion, or ear to the street, it is part of a pattern? Rather than just fighting to get your money back, consider legal alternatives. Even if you do get your money back and you have the time, the money, and a lawyer willing to do discovery.

Or, better yet? Rather than threatening suit, file a criminal complaint for credit/debit card abuse. Under section (b)(1)(A) there, I believe an offense has been committed in such cases, and mental intent does not have to be legally proven. And, here in Texas, per that link, it's a state jail felony. (That said, intent will be in the center of jurors' mind if that goes to a jury trial, and probably in a judge's mind, too. With that said, good luck getting a county or district attorney to file a case.)

Tip 2? Sure, it's fine for a newspaper, like your grocer, to want to be paid in advance. If you're going to pay by credit card, just pay for that ad. You do not have to leave a card number on file.
==

If you're a newspaper publisher, or owner of a group, and don't like the possibility of being tarred with a broad brush?

You have two options.

The first is to call out your newspaper peers. Not by name, of course, even for places where you've heard of this practice being done. But, yes, call them out. Not in an op-ed in your paper, of course. That does nothing. Try the TPA Messenger or whatever state newspaper association trade letter exists in your state, or Publisher's Auxiliary or whatever.

The second is to adopt a public policy at your paper, if you're a publisher, or your group, if you're an owner, if this practice spreads at all. Something like:

"We will give you double your money back for any overbilling for advertising runs you did not authorize."

Then, internally, make repeat violations, even if you can't prove intent, a fireable offense.

And, speaking of the TPA Messenger, one could argue for TPA to be more proactive.

Is CJR pulling punches in the face of Zionism?

Columbia Journalism Review recently had a good piece about how, within the precariat that is modern journalism, editorial cartoonists have b...

All opinion and analysis here are mine alone. No corporation or business, even if I am in the media field, has ownership of, a right to, or a claim on, my personal voice.

More about this blog

This blog is dedicated to looking at the good, the bad and the ugly in print journalism, new media, the interface of new and social media, media institutions and more.